Who visited the Ukrainian Carpathians once forever remember their tops. Rocky, covered with snow or juniper – high mountains attracts  any weather or season.

We offer you top-10 Carpathian mountains. Nine of them create the Chornogora chain and only one is beyond the pale

First point in the list is Bretskul mountain (Height – 1911 m), that is located not far from Goverla and has a dome shape. Maybe because of that it got its name, from the Hutsul dialect “bretskul” – “swollen”, “convex”. One more tip: not far from the top there is the eponymous lake. 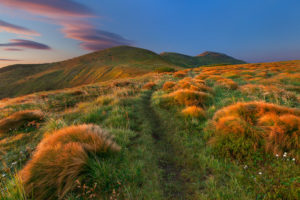 Like Bretskul, it is a part of Chornogora chain Height – 1933 meters. Located on the border of the Transcarpathian and Ivano-Frankivsk regions. The Turkul has a triangular shape, and from the very crown an amazing view is opened. There is a lake with fresh water  – Nesamovyte Lake – that is one of the most famous Carpathian lakes.

Marmarosy – is a unique alpine massif, not like Chornogora. This place is also famous as Hutsul Alps : sharp slopes, sharp rocky ledges, cliffs and numerous significant elevation – that makes them alike. You should also know that there are two mountains with the same name – Pip Ivan. The one in Transcarpathian is called Marmaroskyi and is  1936 meters high.

Menchul mountain is  located on the border of Transcarpathian and Ivano-Frankivsk regions. Height ші 1998 m. The slopes are gentle.

Interesting fact: In 2009, one of the NGOs in Ivano-Frankivsk decided to artificially increase to 2.5 meters in order to add it to the list and entered the Ukrainian-2000 meter high mountains. Plans just remained plans and Menchul still has 1998 m 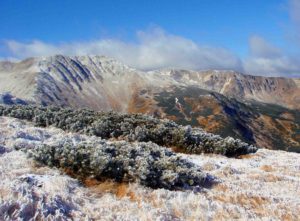 Rebra Mountain is the lowest of the Carpathian 2000 meters height mountains – just is 2001 meters. Once there was the Polish-Czechoslovak border, about which barbed wire, trenches, labeled columns on the spine still remains

Hutyn Tomnatyk —is the next mountain 2000 meters high. The height of the peak – 2018 m. Located in  Rakhiv district, Zakarpattya. It is a part of The Carpathian biosphere reserve. On the way to Hutyn Tomnatyk you can also visit Brebeneskul – most high-altitude lake in Ukraine. 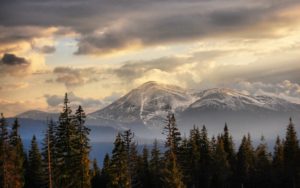 Petros , called as “thunderstorm mountain”, is one of the most visited peaks of the Carpathians, and one of the most dangerous. Height – 2020 m. Petros is right after Hoverla mountains just separated by deep and long saddle that makes Petros alone standing top. The peak is often covered with clouds,  lightning often hit the top  and fierce gale twisting metal charms set on it in a spiral. 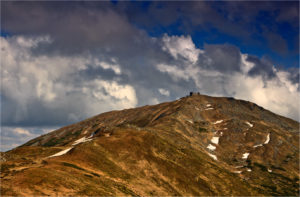 The second Pip Ivan – Chornogora is the mountain height of 2028 m,  is also often called Bilyi Slon (White Elephant). Both names are right: at dawn the  slopes of Pip Ivan are  deep black, and the “Bilyi Slon” top is named by huge stone observatory located on it. Especially beautiful Pip Ivan is in winter, when snow envelops the observatory. Spend the night on the way to Pip Ivan is possible near the quiet lake of Maricheika that is situated in woods under the top. 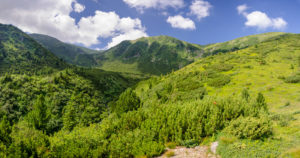 Brebeneskul is the second highest peak of the Carpathians. Height – 2032 m. The slopes are steep and rocky mountains. Often we can see snow until summer. In the hollow between mountains Brebeneskul and Hutyn Tomnatyk mountain there is Brebenesku lake located. 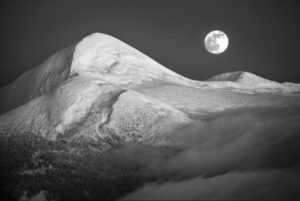 Hoverla is the highest peak of Ukraine. Its height is 2061 meters above the sea. One of the most popular tourist sites in the Carpathians. The name is translated from Hungarian means “snow mountain”. On the top there is a mounted stone monument in the shape of a trident and laid a capsule with the earth from all regions of Ukraine.