Abandoned places have their own charm and mystery. People often face up to the fact that some buildings and places are only built to be used for a certain period or for an event that will happen only once. Some places may have been in the path of destruction due to natural disasters, war, nuclear radiation outbreak, or other environmental or biological hazards. No matter what the reason behind why places are abandoned, people are eager to explore these vacant places and discover the mysteries that are tucked away. There is something haunting, eerie, and maybe a bit romantic about being alone in a place that once was thriving.

Let’s see how look some of the most famous abandoned places in your Ukrainian tour today?

Today it’s absolutely forgotten and a little mysterious – this place was built to divide Russian and Austrian Empires during the Third Partition of Poland. Later, during the USSR, they wanted to keep products there, but it turned out to be the place of very high humidity. This fortification hadn’t been used for many years and because of the humidity brick walls were all covered with greenery. It becomes like a small piece of Ireland in Ukraine. Have an amazing journey into the past, guaranteeing fresh impressions and discoveries.

If you are planning your visit to Ukraine or are already enjoying our beautiful country, don’t miss the unique experience to see human-destroyed but still exciting phenomenon of Chornobyl

The ghost town left by the worst nuclear disaster of all time is being taken over by nature and urban explorers.It is beginning to be swallowed up by the surrounding forest and someday it will no doubt be completely overgrown.

Ukraine’s Prypiat Amusement Park was closed on the same day it opened: April 27, 1986, exactly one day after the catastrophic Chernobyl nuclear disaster. Among the overwhelming sense of abandonment, the most iconic reminder of the disaster is a rusting ferries wheel. 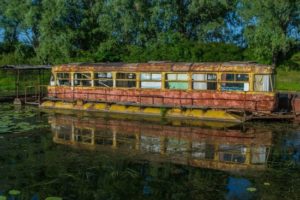 In a quiet backwater of the Desna River you can find an unexpected thing – a real river tram. Locals say that the owner of the “river tram” is a former chief of waterways. One day, he decided to build a floating home and bought a couple of pontoons. Inside the boat cabins were equipped with beds, and a kitchen with a refrigerator. The ship had no engine, but it was not a problem as, at the time, there were a lot of ships on the Desna and any of them could gladly take it in tow. Many years later, the owner of the river tram resigned and abandoned it. Here’s how it looks now gradually destroyed by nature. An amazing and unusual sight. 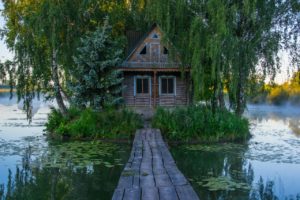 During your Kyiv tour, visit this beautiful place, in the middle of the lake, on a small island in the thickets of trees, you can find a small wooden house. This artificial island was created in the 1970s, and was called “Love Island.”

The house was built later, around 1985, and was called “The House of Hunting and Fishing.” It was used as a place to exhibit hunting trophies. Today, the house is abandoned and the island is popular with local fishermen.

Deep beneath the domes and spires of Kiev’s Old Town, and unknown to the crowds who flock to the monasteries, monuments and cathedrals above, there exists another world. Many of the tunnels are partially flooded, and stalactites hang from the ceilings.

The Ternopil haunted house is situated in the private sector in the “Druzhba” district. The house was built at the place where an old cemetery had been situated. According to the local stories once the house was built, it was settled by ghosts and other mysterious creatures. There were terrible screams and howling heard from the closed windows and light flickered at the time when electricity was undone. The owner of the house allegedly was not afraid to settle his family there, but dancing, flying objects and furniture all survived their home. After this long stone house empty, and now there supposedly lives a woman who found a common language with spirits.. 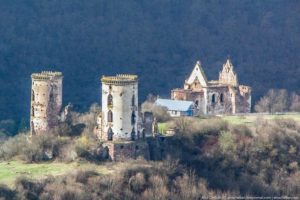 The most beautiful castles of Ukraine are probably located in the west of the country. There are many of them: medieval structures and wonderful ruins surrounded by legends and fairy tales. But which of them is the best? Some would say it’s the castle in Kamyanets-Podilskiy or the one in Pidgirtsy near Lviv, but the castle in Chervonograd must be even better, more beautiful and unusual. It’s the lost city in the Ternopil region and the place of enormous energy and awesome natural landscapes. Ukrainian episode of “Indiana Jones” or “The Lord of the Rings”! The castle in the green creature! It must be the most beautiful abandoned object in Ukraine.

These underground tunnels make up a large network that is hidden beneath the city. The Odessa Catacombs developed over a long period taking almost two hundred years to come to the level of completion you see today. This is not a natural phenomenon, but one that man has definitely had a hand in. The Odessa Catacombs look like a fascinating place to visit, but not without an experienced guide.