Kyiv is the religious capital of Ukraine. This city is exactly special place, where was the first Epiphany of Kyivska Rus’.

The Kyiv Pechersk Lavra, also known as the Kyiv Monastery of the Caves, is an ancient cave monastery in Kyiv. It was founded in 1051 by monks Anthony and Theodosius, and has become an important center of Orthodox Christianity in Kievan Rus’. Its ongoing development and construction followed for the next 9 centuries. Your Ukrainian guide will tell you, that the word “pechera“ means cave in the Slavic tongue. The word “lavra“ is used to describe high ranking monasteries of the Eastern Orthodox Church. The Lavra buildings looked like small towns with their own streets. In Greek “lavra“ means “the street“. 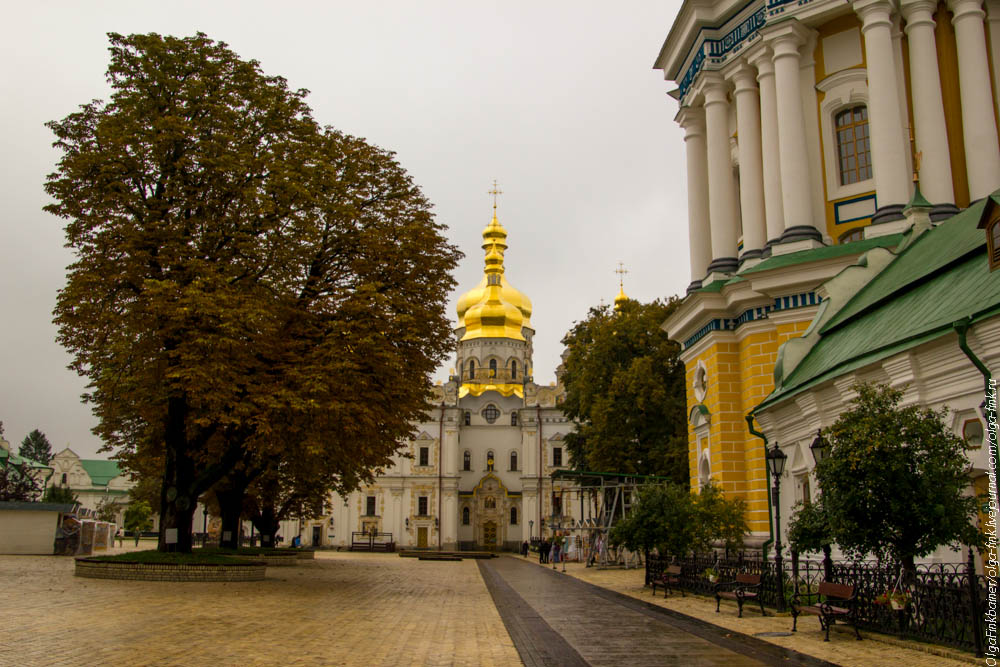 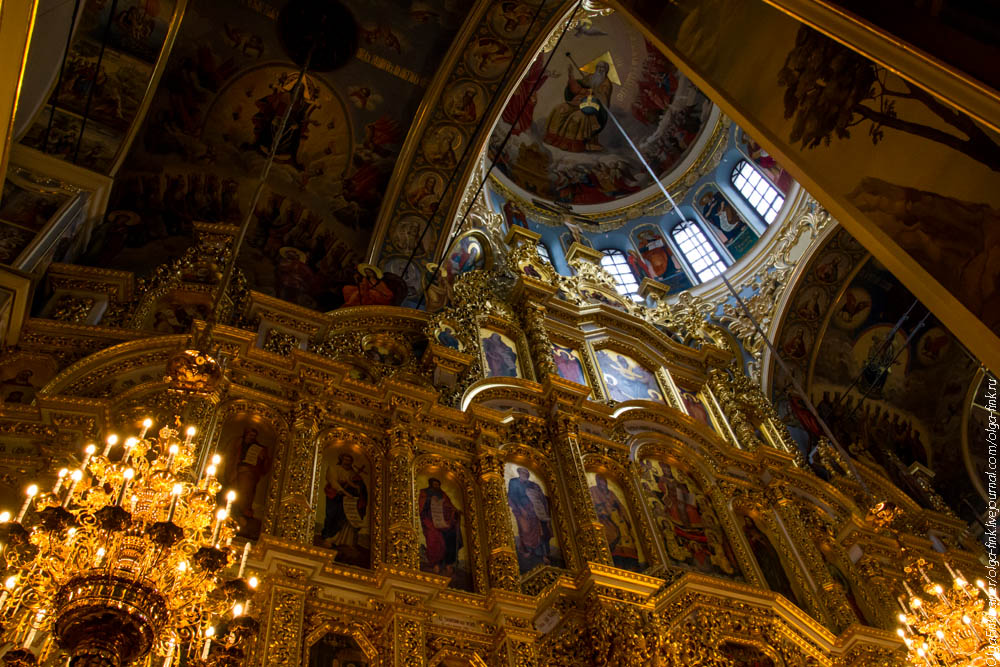 There are 102 stone structures set in a 26 hectares area, which are recognized architectural monuments. There are also many wonderful paintings, works of arts, old-painted books and crafts.

There are very long tunnels, where are imperishable relics. It is the main reason why Kyiv Pechersk Lavra is the heritage of UNESCO. 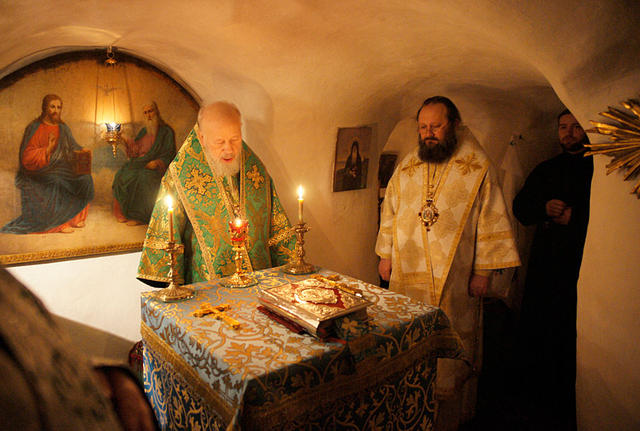 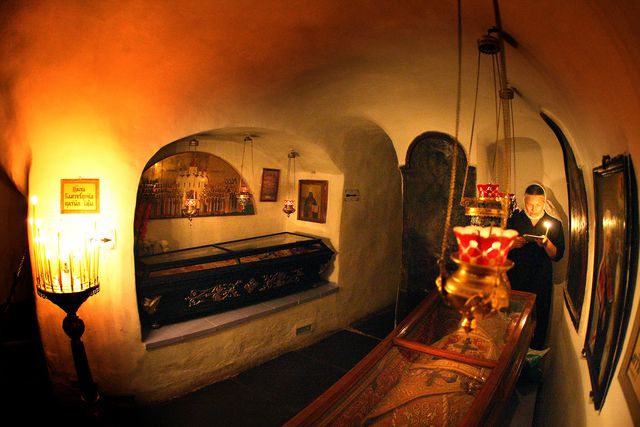 Saint Sophia Cathedral in Kiev is an outstanding architectural monument from the Kievan Rus’ era. Today, it is one of the city’s best known landmarks. The first foundations were laid in 1037 by prince Yaroslav I the Wise. The cathedral has 5 naves, 5 apses, and, quite surprisingly for a Byzantine structure, 13 cupolas (domes). On the inside, it has mosaics and frescoes from the 11th century, which were created with a unique technology, depicting Scriptural scenes, individual figures of Church Fathers, Apostles, maidens and warriors. It was also known as a seat of the Kiev Metropolitan. The first known library in ancient Rus and the first school for boys and girls were both founded by Yaroslav the Wise. In your Kyiv tour visit the cathedral, that was the first Ukrainian patrimony to be included in the World Heritage List. 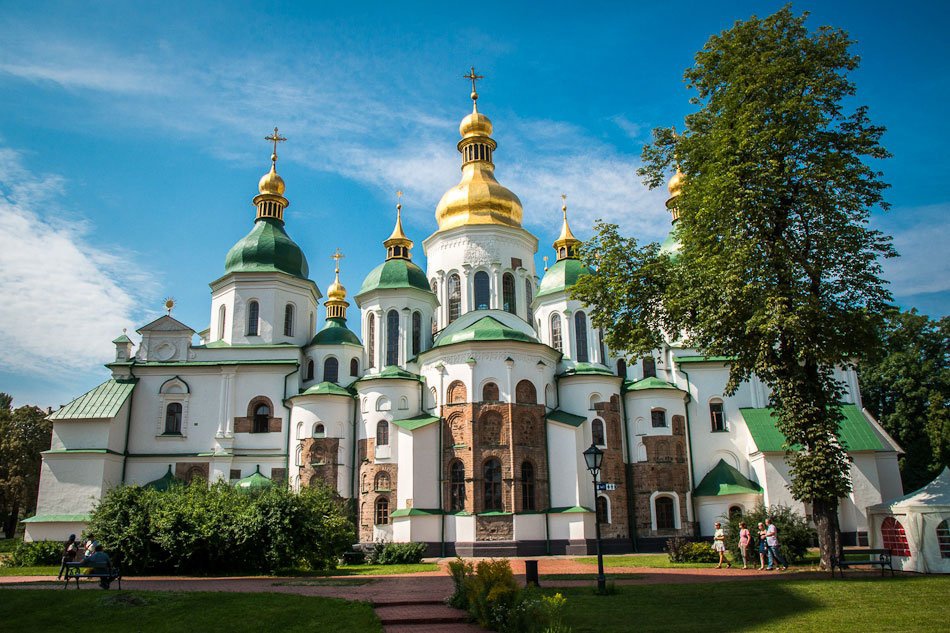 The baroque St. Andrew’s Church or the Cathedral of St. Andrew was built in Kyiv between 1747 and 1754, and designed by the imperial architect Bartolomeo Rastrelli.

Open Kyiv,overlooking the ancient Podil district from a steep hill, this exuberant and colorful structure with one large dome and five lesser cupolas is one of the city’s best known landmarks. Since 1968, the church has been open to visitors as a museum. Occasionally the edifice is used for services of the Ukrainian Autocephalous Orthodox Church, one of several national churches unrecognized by major Orthodox patriarchate 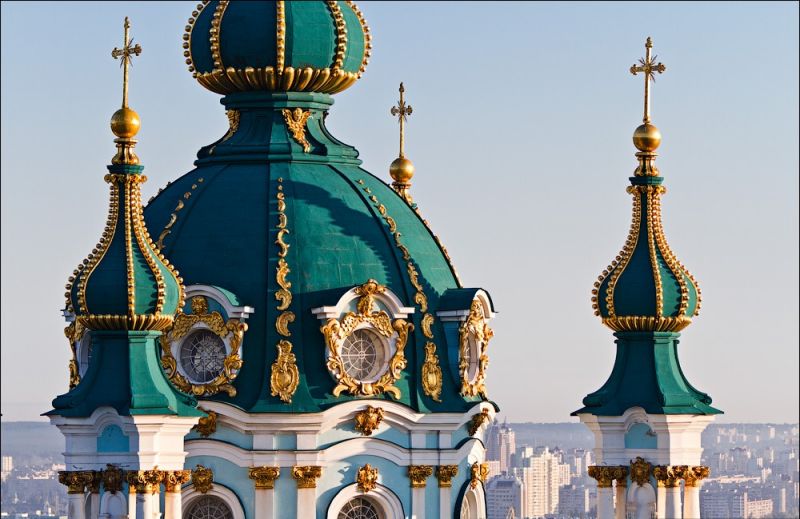 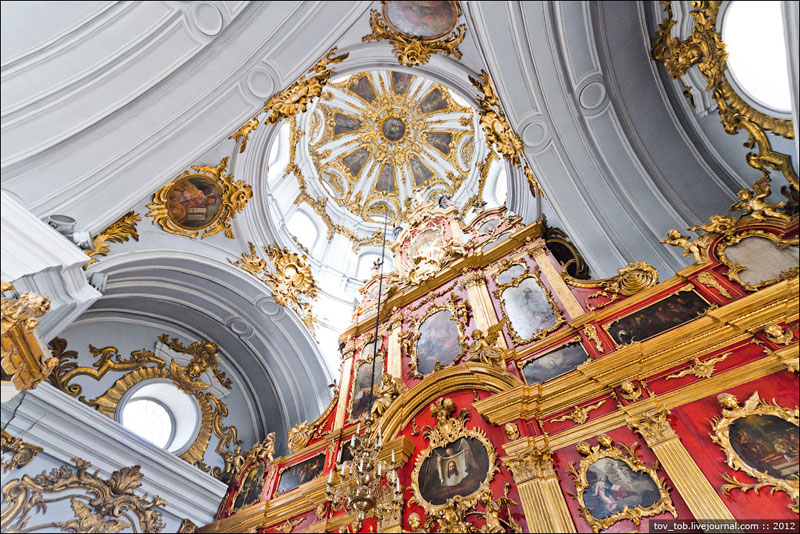 St. Michael’s Golden Domed Cathedral is multi-tiered church complex seems to reign on the steep bank of the Dnieper in all its glory. Originally built by a grandson of Yaroslav the Wise in 1108, this cathedral was one of the biggest monasteries of ancient Kyiv. St. Michael’s Cathedral, hallowed in the name of Kyiv’s saint patron – Archangel Michael. Since the beginning of the thirteenth century the Monastery had kept its prized sacred object – St. Martyr Barbara’s relics. 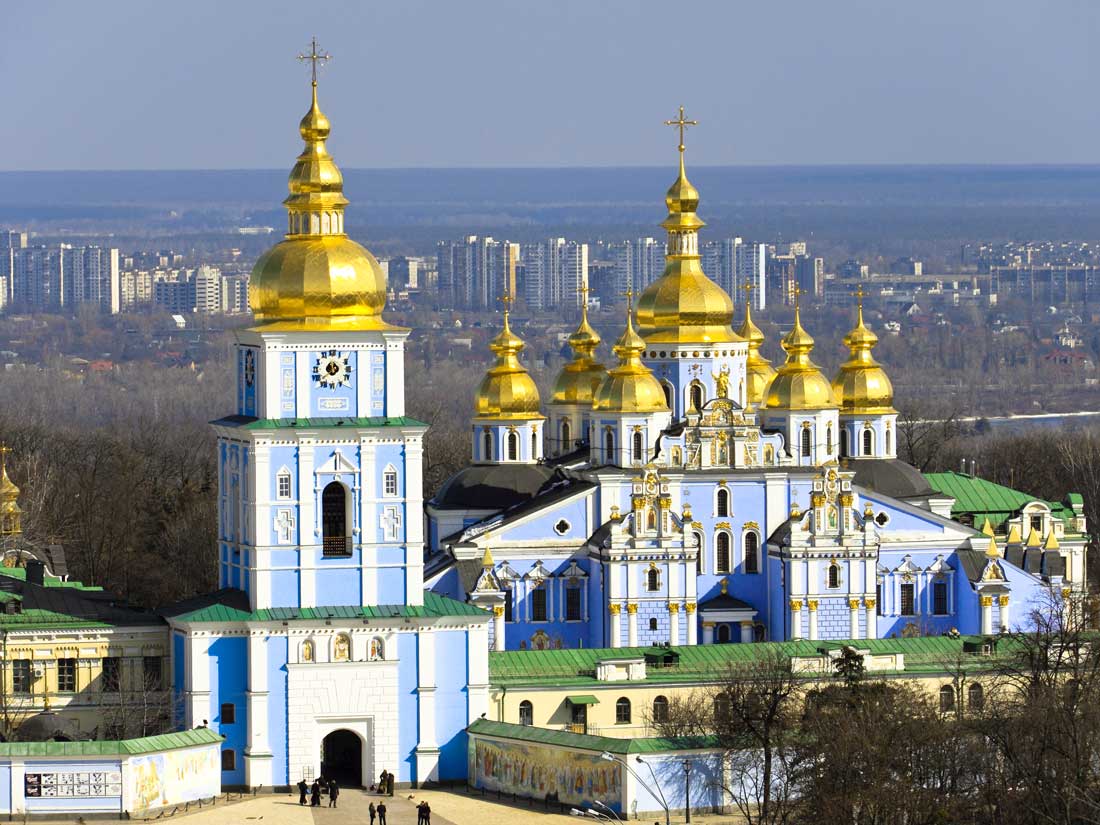 Tour of Ukraine will show you all the beauty of the Cathedral’s original interior was adorned with Old-Rus’ mosaics and frescos. St. Michael’s Golden Domed Cathedral and some of the Monastery buildings were destroyed in 1934 through 1936 by the Soviet regime of the mid-30s in keeping with their anti-religious propaganda for building a Soviet government center instead. The sky blue exterior and glittering golden domes seem a bit too new and shiny for this ancient city, but they are certainly stunning. 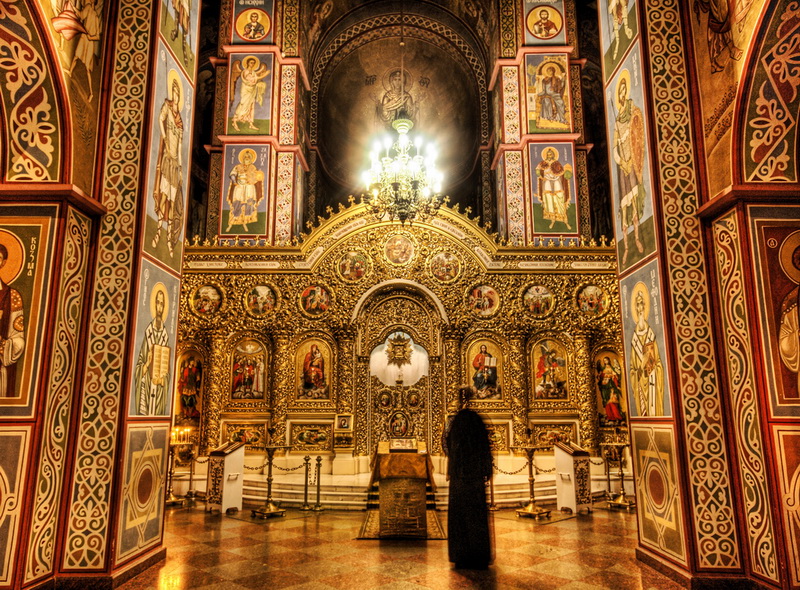 St. Volodymyr’s Cathedral is another one of Kiev’s major landmarks and the “Mother Cathedral“ of the Ukrainian Orthodox Church Kiev Patriarchy. One of two major Orthodox Churches in Ukraine, it is, however, viewed, uncanocical by the Eastern Orthodox Communion. It is one of the three greatest Orthodox churches built in the 19th century. 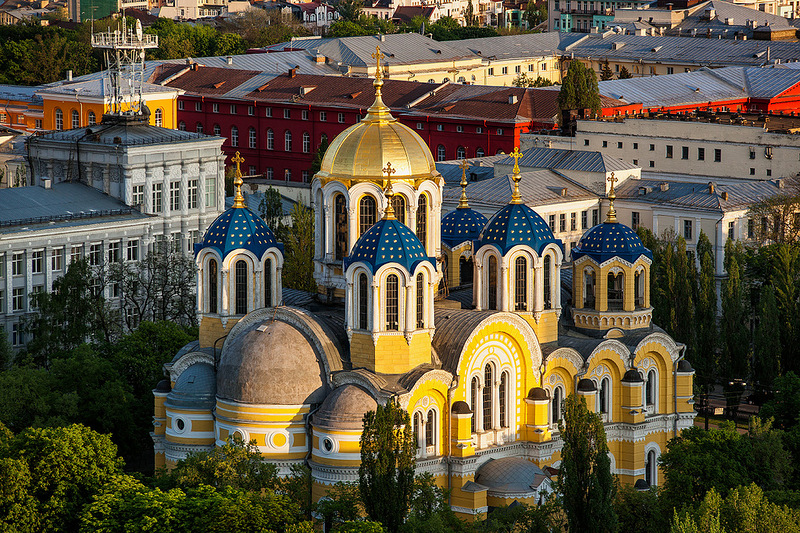 Trip to Ukraine will introduce you the cathedral’s colorful interior, that particularly strikes the eye. Mosaics were created by masters from Venice. Iconostasis is carved from the white marble brought from Carrara. The main facade is decorated with a double door made of oxidized bronze with enamel, carving and openwork tracery. On the sides of the door are figures of Princess Olga and Prince Vladimir made of embossed bronze and portrayed against a blue enamel background. 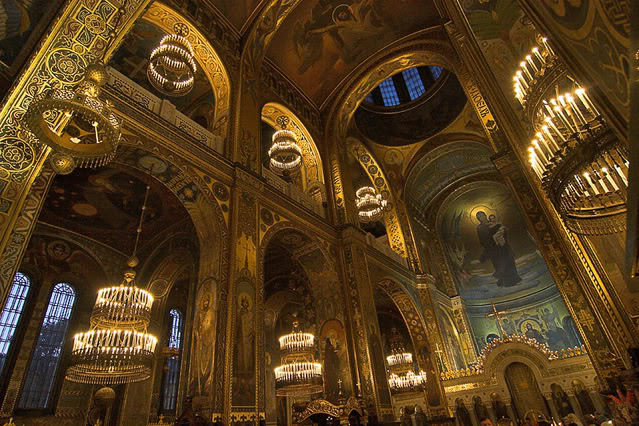 St. Nicolas Roman Catholic Church built by the prominent Kyiv architect Vladyslav Horodetskyi, the Church is immediately recognizable by its two needle like towers stretching up into the sky. It’s traditional Gothic style comes from the 1899 through 1909 era. Sculpturing was done in a studio of the sculptor Elio Saal. The Church was re-constructed in 1979-1980. Today it serves as a functioning Catholic Church as well as a concert hall, welcoming anyone who admires organ chamber music, and is considered a “must see“. 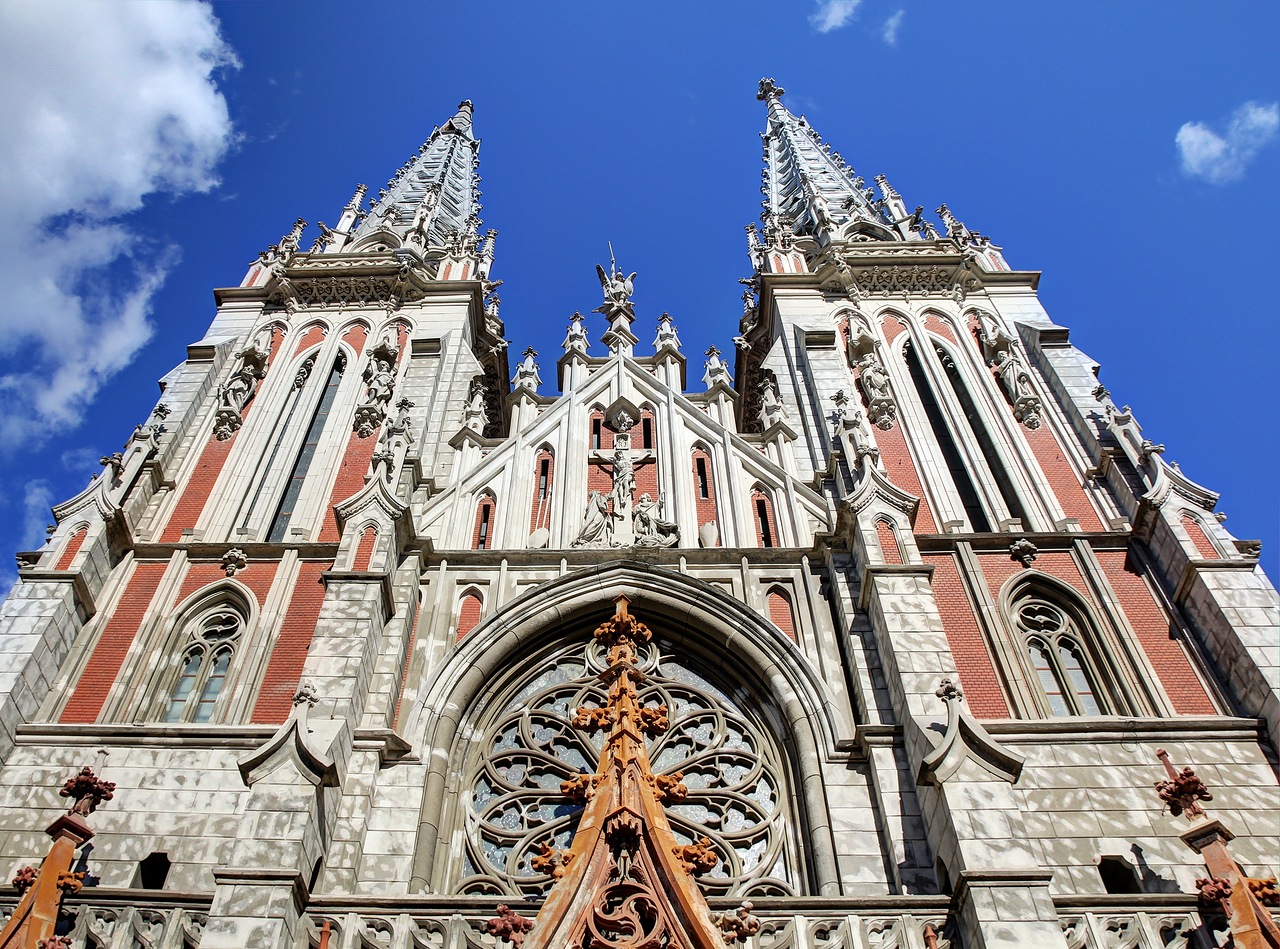 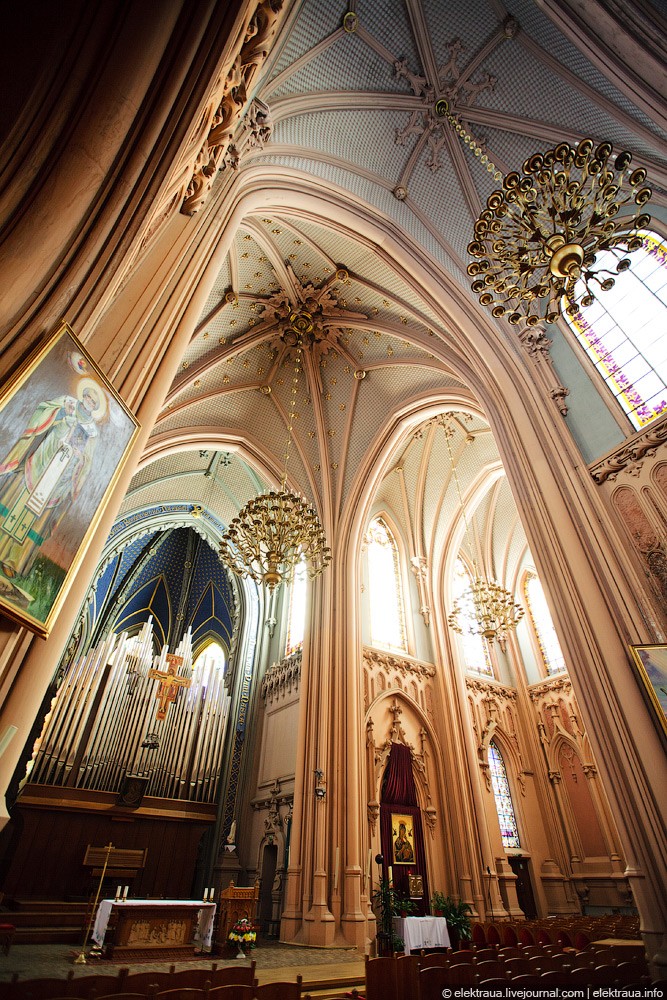 Just GO to Ukraine and have KYIV TOUR. Enjoy antiquities of churches. Feel a pray of millions. Open your heart to the miracle.