10 unusual sculptures and monuments in Ukraine

Usually people build monuments in honor to important individuals in politics, religion, history. The message and intent of most of these tributes is clear, but some are more obscure than others. But each country and city has its unique, unusual, and sometimes weird monuments. Ukraine is not an exception. A lovely sense of humor is a distinct feature of Ukrainian people. That’s why coming to Ukraine you will see a great variety of original and unusual monuments that will give you good mood and make you smile. I offer you a selection of monuments that are located in different cities in Ukraine.

Here are top 10 of the most unusual monuments you will meet during your Ukraine tour :

Statue of Leopold Masoch is located near one of the most popular restaurants in front of his birthplace in Lviv.
Monument is unusual: on the chest of a bronze statue located magnifying glass through which can be seen erotic pictures. From under his coat sticking someone`s hands. But the main secret of the monument is the left pocket of his pants.  If you put the hand into his pocket, you can find something… Here is such an unusual approach to sculpture!
This monument is located at one the most beautiful streets of the city – the Serbian, in the heart of the city. So, you should undoubtedly check in there if you are having your Lviv tour.

2)Hedgehog in the Fog Monument (or ‘Loshadka’)

During your Kyiv tour you should definitely see this – a hero of one of the most famous cartoons of USSR times – the “Hedgehog in the Fog’ . You can find the hedgehog at the very heart of Ukrainian’s capital on the crossing of Reytarska and Zolotovoritska streets and Georgiivsky lane.The citizens of the capital and guests are smiling and taking pictures when they look at this work of art, because now they can touch their favorite cartoon hero. Frankly speaking, you should touch a hedgehog very gently, because its needles are made of nails and screws.The hedgehog is considered to be a talisman, that’s why people throw a lot of odd money near it. In 2003 year basing on results of a survey of 140 cinema critics and animators from different countries, “Hedgehog in Fog” was declared the best cartoon in the history of animation that’s why the monument appeared . 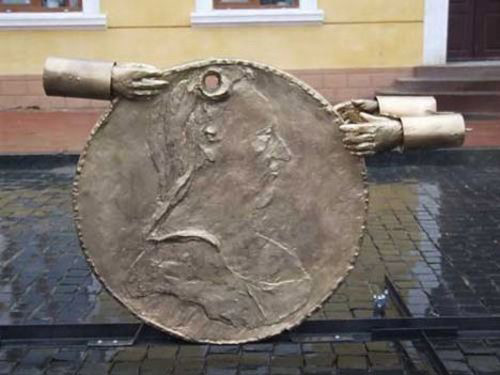 This is a place where 200 years ago people recorded a fact of political corruption. Representatives of Austro-Hungarian empire presented money to a Russian count in exchange of appending Chernivtsi region territory to Austro-Hungary. 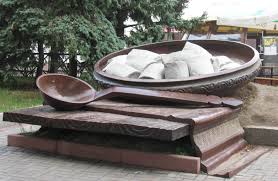 Opening of the monument was dedicated to the birthday of writer Nikolai Gogol who wrote about this delicious meal. Poltava Dumplings Monument personifying the wealth and well-being of the family and is a huge bowl with already prepared twelve dumplings and a big spoon on a pedestal in the form of a wooden table.Poltava Dumplings Monument is a point of visiting of local wedding couples. So in Poltava there is an interesting tradition – the bride and groom are photographed at Poltava Dumplings Monument and one member of the couple sits down in a spoon and the second – holds on the spoon handle. There is a believe that which person from couple touch the spoon handle and hold it on – will be the head of the family. So, if you are going to Ukraine tour with us, don’t miss the opportunity to try dumplings and see the unusual monument! 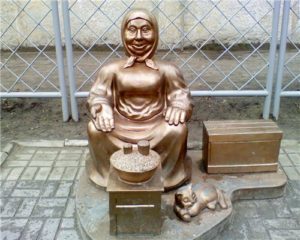 It is a symbol of commerce and trade. People believe that if you sit by grandmother before sunrise, the whole day will be a good bargain. Also, the folk tells that grandmothers in the same seed keeps their feets in warm.

6)’The tongue will lead to Kyiv’

According to the authors, the monument presents a metal globe in the shape of the Earth, with a long tongue that is decorated with forged plates with names of Ukrainian cities. It is a symbol of the road to Kyiv, because as we know, “Tongue will lead  to Kyiv”. Unique and only one all around the monument was brought to Ukraine Book of Records as the longest “tongue” The length of the “tongue” is 6 meters, width is 0.8 meters,  diameter of the globe is 1.5 meters. Direction is toward the capital, a monument-record became a favorite meeting place in Zhytomyr.

Monument that is of about 2.5 meters  height symbolize endless Ukrainians’ love to work. It is made of bronze and looks like a honeycomb, on which the bee sits.

One of the more unusual attractions located in the capital of Ukraine – a monument to the first tram installed on the Vladimir descent. The place was chosen by chance, because this was the first electric tram started up. This fair even for such large cities as Kyiv, an event held in June 1892. This monument is located in the outskirts of Poshtova square. The cast-iron stationary tram  symbolizes how grateful Kiev citizens are for its great and continuous service. The carriage filled with passengers seems to be floating on air. Some of the passengers are ready to exit the tram, while other sit and observe the streets from their windows.

9) The Monument to Bagpack 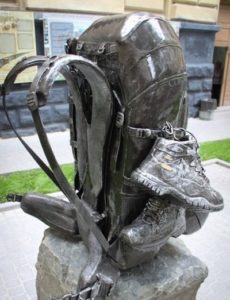 Lviv is so unique and original city that there even was a place for such  a strange monument as … backpack – the only monument to tourist backpack around the world.What is hidden inside a backpack – everyone “packs” it his own way, but on the fact that the pack is ready to go and Everest, talk necessities for travelers who are attached to the sides of the Iron bags, mats, tents, water bottle  and even sneakers variables. Now every traveler, tourist or researcher has the opportunity not only to see this interesting monument, but also free to take pictures for memory. So you can join to useful health initiative – to wear comfortable backpack instead of hand bags .

10) The monument to a girl rope-walker 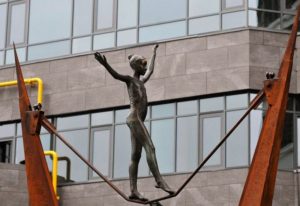 In Kiev on the Strutynskoho street between two new buildings there was set a monument to the girl rope walker .The sculpture is made of bronze and steel is called “Equilibrium”. According to the author, the girl that keeps a balance on the rope symbolizes balance and harmony of human and the environment in our dynamic and unstable world. when the strong wind is blowing the statue is lightly shaking, but doesn’t fall.